My wife and I are blessed with the of the most wonderful kitties the world has ever seen.

This is Beebee. His real name is Kimba. The photograph does not do justice to his size, for Beebee is the Nero Wolfe of cats. Okay, without the keen intellect or the unaffectionate nature. Beebee's a lover, not a fighter, and is constructed rather like a medicine ball with legs.

Here he is with his daddy.

This is Mokki (pronounced "Moe-key.") She was a harder one to explain. Very affectionate sometimes, hiding from us for days on end other times, A very vocal "talker" who made tribble-like noises when you petted her,and purred and leaned into the patting hand.... But who ran away from the sound of a case of Handi-Wipes opening. But,Boy, was she pretty! Mokki passed away early in AUgust of 2005.

Here they are together.

This was Peekle (Okay, "Pickle," but we never say it that way) a former kitty of ours who were were pleased to be able to re-adopt. Peekle had a talent. He could play dog-style fetch -- but only with a Striped Ball. Peekle was an amazing cat, very bright, alert, aware, curious. Most cats, travelling in a car, want to be enclosed, and become upset when they have to look out the window, and see the world go by. Peekle loved it. He passed away late in January, 2004.

March 11, 2002: Peekle and Beebee were getting quite used to each other.

This was Star, who we recently lost to Old Age. We used to call him "Mister Needs-Attention" because if he learned of affection being given anywhere he could get to, he'd be right there to demand that he get even more for himself. 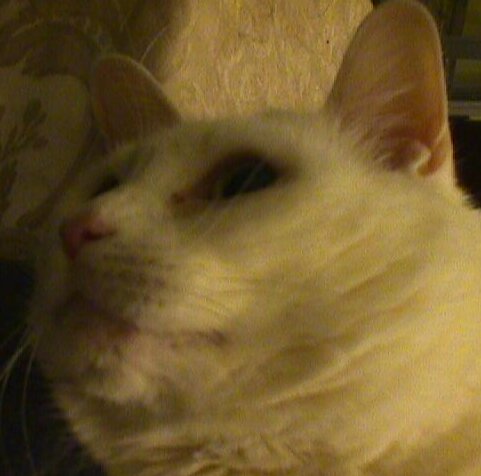 Toward the end, Star became very weak. On what turned out to be his last day, my wife found Star lying in his makeshift kitty-bed, with his head hanging over the front end, face down to the floor. She couldn't bear to leave him like that, so she improvised a pillow for him. It's the saddest, cutest picture ever.

Within three hours after this photograph was taken, Star passed away.

This was "Cookie." He passed away in the late 1990s. He was a friend and partner for many years.